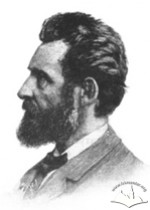 Leonard Marconi was a sculptor and building decorator, professor at the Higher Technical School in Lviv.

Leonard Marconi was born in Warsaw in 1835. His family came from Italy. His grandfather, Leandro Marconi, an architect and painter who taught ornamentation at the Bologna Academy of Arts. His father, Ferrante Marconi (1798–1868), was a sculptor, and his uncle Enrico (Henryk) Marconi was an architect, a prominent representative of neoclassicism in the Congress Poland. His sister Adelaida was married to sculptor Andrzej Pruszyński; his cousins ​​Leandr and Władysław (1848–1915), children of Enrico Marconi, were architects, and Karol Antoni Tytus (1864–1864) was a painter in Florence.

He studied in a non-classical gymnasium in Warsaw and mastered the art of sculpture first in his father's studio and later, in 1856-1858, at the sculptural department of the School of Fine Arts in Warsaw where Konstanty Hegel taught. He continued his studies in 1859-1862 at the Academy of St. Luke in Rome under the guidance of Adamo Tadolini. At that time he participated in two competitions held by the Pantheon Academy. He was awarded a silver medal for his relief "Christ and St. Peter" and a gold medal for his relief "St. Peter's Farewell to St. Paul."

In 1862 Leonard Marconi returned to Warsaw. Initially, he worked with his father and later with Andrzej Pruszyński, husband of his sister Adelaida. During this period, he created about twenty sculptures for various architectural objects, as well as sculptural portraits, religious compositions etc.

In August 1873, Leonard Marconi was appointed extraordinary professor of ornamental drawing and modeling in the Technical Academy in Lviv. From 1877, he became chair and he remained on this position until his death. The drawing and modeling was part of the architectural faculty.  In 1881-82, 1882-83 and 1886-87 he performed the duties of the dean of the department. According to literature, he was the teacher of famous Lviv sculptors Antoni Popiel (1865–1910), Piotr Harasimowicz (1857–1914), Piotr Wojtowicz (1862–1936), painter and sculptor Michał Sozański (1853–1923) and others.

In 1880, Leonard Marconi received an official permit (pol. karta uprawniająca) to perform sculptural works in Lviv. From that time on, he worked profusely in the fields of carving, molding, casting, sculpture restoration and sculptural decoration.

He had a large studio in the main building of the Lviv Polytechnic. He enlisted cooperation of sculptors from Lviv and other cities, including Michał Stefan Korpal, a sculptor from Krakow (1854, Krakow — 1915, Pelhřimov, now Czechia), whom Marconi invited in 1874 to make decorations for the Lviv Polytechnic building; Gabriel Krasucki (1837, Warsaw — 1885, Lviv), who did not have his own studio and worked in local sculptors' studios, including that of Marconi; Antoni Popiel, who made sculptures following his designs or models (in particular, for the Georges Hotel and for the Industrial Museum; after Marconi's death, he made a large model for casting the Tadeusz Kosciuszko monument for Krakow, etc.).

In general, Leonard Marconi made a large number of sculptural works, mainly for architecture in Lviv and other cities. Accordingly, he collaborated with a lot of architects, including Julian Zachariewicz, Erazm Hermatnik, Sylwester Hawryszkiewicz, Jan Schultz, Alfred Kamienobrodzki, Wincenty Rawski and others.

All these architects worked in Lviv in the last decades of the 19th century. Architecture was dominated by historicism then and focused on the artistic styles of the past. When it came to public buildings, architects in Lviv often preferred classical styles, Renaissance and neolassicism. Marconi's works, as he was educated on the traditions of classical Italian sculpture, stylistically corresponded to the Neorenaissance architecture, which prevailed at the time. Marconi created a huge number of sculpture, mostly allegorical figures. Sculptural ornamentation, exterior and interior décor, was a big part of his work too. Leonard Marconi gained popularity largely due to his comprehensive approach. He was successful at uniting sculptural decoration and architectural design into a whole, which was highly valued in historicism. Therefore, Marconi knew no idle time, was constantly involved into decorating almost all of important public buildings in Lviv at the time.

Apart from architecture, Marconi also had other activities related to his profession. He founded a workshop for alabaster sculpture in the late 1870s. Located in Berezditvtsi village (powiat Bóbrka), it was near to the most famous alabaster deposits in Galicia. The white stone was known as "Ruthenian marble" at the time. According to Ihor Syomochkin, Marconi researcher based in Lviv, "Marconi could hardly cope with financial problems associated with the cost of the alabaster business, as evidenced by the following: failed attempts to increase his salary at the Polytechnic (1878-1880) and, later (1889), failure to pay debts to his creditors. After Leonard Marconi's death in 1899, the business in Berezdivtsi gradually fell into decay."

In addition to these, Marconi created also some religious compositions (mainly in his Italian and Warsaw periods; in Lviv, the altar in the Franciscan nuns' church can be mentioned), as well as memorial, monumental, and portrait sculptures.

In 1892 Marconi was registered in Industrial Exhibition catalogue as a member of the exhibition committee, a member of the jury and a delegate from the Chamber of Commerce (pol. Izba Handlowa) of Lviv, Krakow, and Brody.

At the corner of present-day Antonovycha and Rusovykh streets in Lviv, there is one of the oldest houses in the area, the former villa of Leonard Marconi, built in 1878.

Marconi was buried at the Lychakivsky cemetery in Lviv (field 57).

Vul. Krakivska, 21 – Church of the Transfiguration


1874-1877 — allegorical group "Engineering sciences, architecture and mechanics" on the attic, as well as decoration of the staircase, main hall, and the library in the Lviv Polytechnic main building.
1876-1880 — interior, including that of the main staircase, in the Viceregency building on Czarneckiego street (today, vul. Vynnychenka, 18).
1876-1888 — decoration of the Franciscan nuns' church on Kurkowa street (today vul. Lysenka, 43)
1877 — medallion with the image of prince Józef Poniatowski gifted to the Lubomirski museum in Lviv.
1878-1894 — sculptural decoration of buildings no. 1, no. 3, no. 13, no. 15, no. 17, no. 19, no. 19a, no 21 on Kraszewskiego street (today, vul. Krushelnytskoyi).
1879-1881 — decorative hydraulic lime works on the Galician Diet's façade, interior sculptures in its assembly hall, ornamentation of the staircase. Marconi also took part in the competition for the project of the pediment group "Galicia" for this building (2nd prize).
1880 — allegorical sculptures "Patriotism", "Hospitality", and "Courage", placed above the portal of the City Hall on the occasion of Emperor Francis Joseph's visit (dismantled in 1928).
1880 — Adam Mickiewicz bust for apartment building façade on Mickiewicza street (vul. Lystopadovoho chynu, 14).
1880 — façade and interior reliefs for Polytechnic's chemical building.
1880 — carved wooden cabinets in the library in the Lviv Polytechnic main building, in collaboration with Tadeusz Sokulski.
1880s — project of sculptural decoration of the Transfiguration Church.
1881-1884 — carved wooden frames for portraits of Emperor Francis Joseph I, exhibited in the Lviv Polytechnic auditorium.
1881 — tombstone on the grave of a girl named Dziunia at the Lychakivsky cemetery.
1885-1887 — sculptural decoration of the buildings on Brajerówska street (today, vul. Lepkoho 6/8 and 10/12).
1885-1887 — façade of the Railway Directorate building on Trzeciego Maja street (today, vul. Sichovykh Striltsiv, 3), with allegorical figures of "Electricity", "Mechanics", "Engineering" above the second floor windows, railway symbols, and a stone figure of Mercury above the attic.
1887 — Adam Heydel's tomb at the Lychakivsky cemetery, in collaboration with architect Jan Schulz.
1888 — tombstone of Maria Bartus in the Dominican church.
1890-1891 — sculptural group "Frugality" (with a figure of Galicia) on the Galician Savings Bank building on Karla Ludwiga street  (today, prosp. Svobody, 15), as well as vestibule reliefs.
1890-1893 — façade décor for the Grand Hotel on Karla Ludwiga street (today, prosp. Svobody, 13).
1892 — façade décor at Podlewskiego street (today, vul. Hrebinky, 8).
1892 — Virgin Mary statue on Czarneckiego street (today, vul. Vynnychenka, 1) which is not preserved.
1892-1893 — allegorical sculptural group "Triumph of Justice" on the Provincial Court building, today, the Lviv Polytechnic building on vul. Kniazia Romana, 1/3.
1892-1897 — bronze monument to Aleksander Fredro on the Akademicka square
1893-1897 — new building of the Railway Directorate on Krasuckich street (today, vul. Ohiyenka, 5). Like the first building of the Railway Directorate, it imitated the décor and forms of the late Italian Renaissance. Its avant-corps was also topped with a sculpture of Mercury.
1894 — fountains for the General Provincial Exhibition in Lviv.
1895 — commemorative bust of Stanisław Skarbek, granted to the city and installed on Wały Hetmańskie (today prosp. Svobody, not preserved).
1898 — posthumous medallion and portrait of Julian Zachariewicz (Lviv Art Gallery collection).
Late 1890s — Marconi began sculpture works for the Great City Theater, but did not manage to finish them due to his death.
1901 — sculptures on the Georges Hotel, made by Antoni Popiel according to Marconi's models.
1898-1899 — participated in the Industrial Museum design project. Marconi was the author of master plans and decoration. The project was implemented under the guidance of architect Józef Kajetan Janowski and constructor Edmund Żychowicz.


Early 1860s — participated in two competitions of the Pantheon Academy in Italy. Marconi was awarded a silver medal for his relief "Christ and St. Peter" and a gold medal for his relief "St. Peter's Farewell to St. Paul."
1866 — children's figures on Granzow's townhouse on Dąbrowskiego street in Warsaw.
1868 — allegorical figures of "Architecture", "Painting", "Sculpture", and "Mechanics" on the Raua’s villa on Ujazdowskie alleys in Warsaw.
1868 — allegorical figure of Industry on Fajans' townhouse on Przedmieście Krakowskie street in Warsaw.
1870 — plaster medallions of Tomasz Dolabelli and Michał Stachowicz at the Zachęcie exhibition hall in Warsaw.
1875 — tombstone on the grave of Maurycy Gosławski at the cemetery in Stanislawów (today Ivano-Frankivsk).
1876-1878 — supervised the restoration works in the castle church in Brzeżany (today, Berezhany), took part in the conservation of the Sieniawski family tombstones.
1876-1880 — Chopin's epitaph, in collaboration with Karol Kloss and Andrzej Pruszyński; it is kept today in the church of St. Cross in Warsaw.
1878 — project of the monument to Anna Dorota Chrzanowska from Trembowla (Terebovlya).
1878 — capitals of arcades and a column for Alfonsyna Dzieduszycka’s palace on Kurkowa street (today, vul. Lysenka, 15), which has not been preserved.
1879 — altar in the palace chapel in the town of Raj (today, Ray) near Berezhany.d
1883 — commission for projects of monuments to Mikołaj Sieniawski and Jan III Sobieski,to be installed in Brzeżany (today, Berezhany).
1885 — participat in the competition for the Adam Mickiewicz monument for Krakow.
approx. 1890-1891 — collaborated with Julian Zachariewicz on the decoration of a synagogue in Chernivtsi.
1891 — participated in the competition for Stanisław Moniuszko monument in Warsaw.
1893 — participated in the competition for Tadeusz Kosciuszko monument in Chicago (2ndplace).
1895 — began work on the Kosciuszko monument for Krakow; the model was completed by Antoni Popiel. Władysław Dedrzeński, a sculptor and foundryman from Krakow, cast it from bronze. In 1900, the monument was placed at the Wawel. It was destroyed during the Second World War and restored according to Marconi’s model in 1960.
1898 — supervised of the casting of the Mickiewicz monument for Warsaw.
(?) — crucifixion in the main altar of the church of All Saints in Warsaw.
(?) — caryatids at the Kronenberg Palace in Warsaw.