The Bohomoltsia street design is unusual for the city. An ensemble consisting of residential apartment buildings is grouped around a small square with a public green zone. As for the first years of the 20th century, this is a quite innovative design, as new streets in Lviv were laid exclusively straight and without breaks at that time, façades directly bordering on sidewalks as required by building norms.

What does the square speak about?

Bohomoltsia street is located virtually in the city center. The fact that it has a public green zone in its middle shows the architects’ attention to the problems of the densely built up urban environment; apart from that, the architects realized the city’s need of green spaces and public recreation areas as well as the needs of residents and their comfort. The Bohomoltsia (then Adama Asnyka) street project realization in 1904-1908 was a precedent, following which Lviv architects began to search for new forms of streets trying to insert more green spaces in them and thus making urban space more comfortable and humane.

The buildings of Bohomoltsia street

The architecture of individual buildings located on this street is also noteworthy. The three- and four-storied apartment townhouses were built with the use of modern reinforced concrete structures and with the connection to pipelines and networks. Their design combines the Vienna Secession style motifs and stylized or modernized elements of some styles belonging to the past times, from ancient architecture to the Neo-Gothic and Neo-Baroque, different in each of the houses. The design includes a spacious, unusually shaped main staircase, pseudo stained-glass windows, bizarrely shaped forged items, colored majolica tiles on the walls and ornamented floor ceramic tiles.

The purpose of the theme

The purpose of the theme is to highlight the importance of Bohomoltsia street as an urban planning monument of the time when architectural modernism was being born, and to demonstrate some design features of individual houses, in the context of the general urban development of Lviv, as well as stylistic, ideological, and other factors affecting the architecture of Lviv during the 19th century.

Design features of the buildings 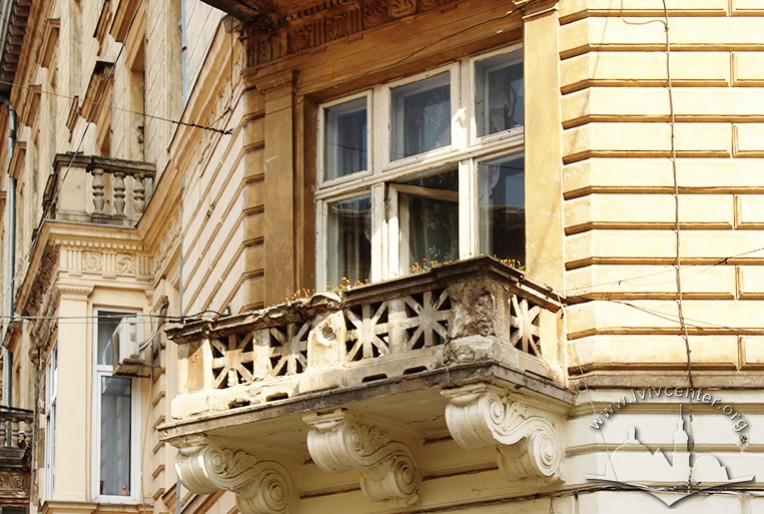 On Bohomoltsia Street, the building no. 1 has the most conservative design. Its laconic facades are enlivened only by such balconies with Classically-inspired decor, and analogical bays.
Read more 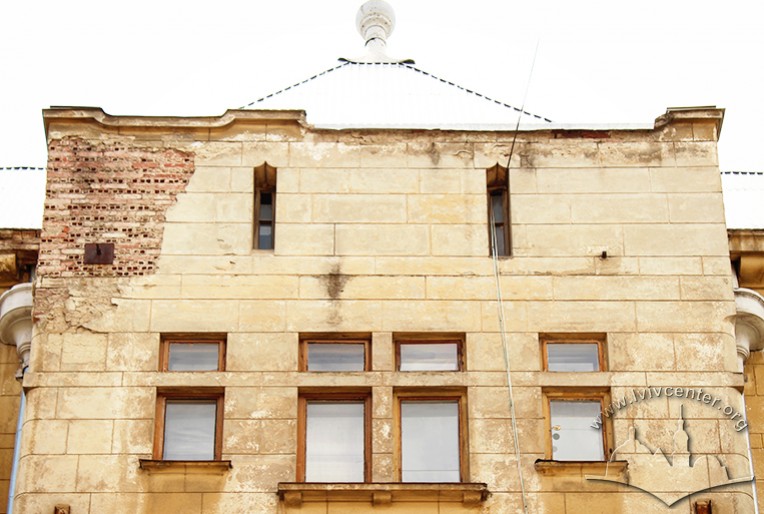 The design of the building no. 2 features massive shapes that remind of architecture of Medieval castles. Among these are bays, based on different plans, also the attic windows look as if arrowslits.
Read more 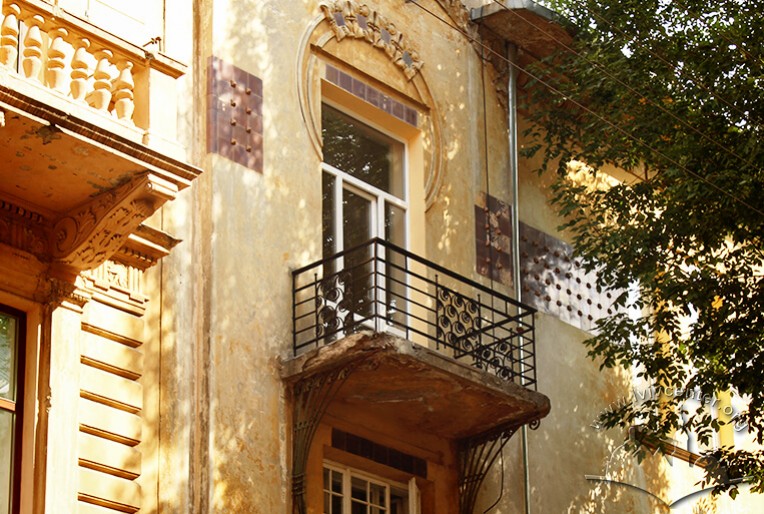 Imaginatively shaped metal balcony consoles and railings, also iridescent mayolica tiles are the features of the building at 3 Bohomoltsia St. This house is the most similar to the Secessionist architecture of Otto Wagner.
Read more 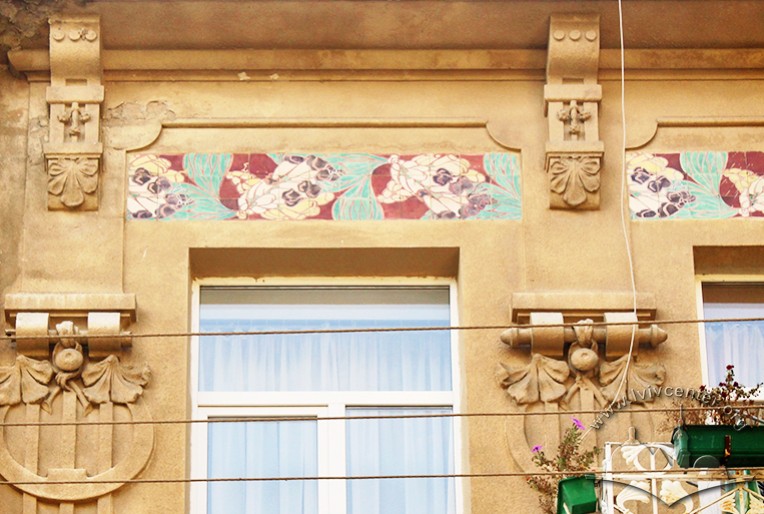 Abundance of flower motives in the plasterwork as well as mayolica panels is a feature of the building no. 4.
Read more 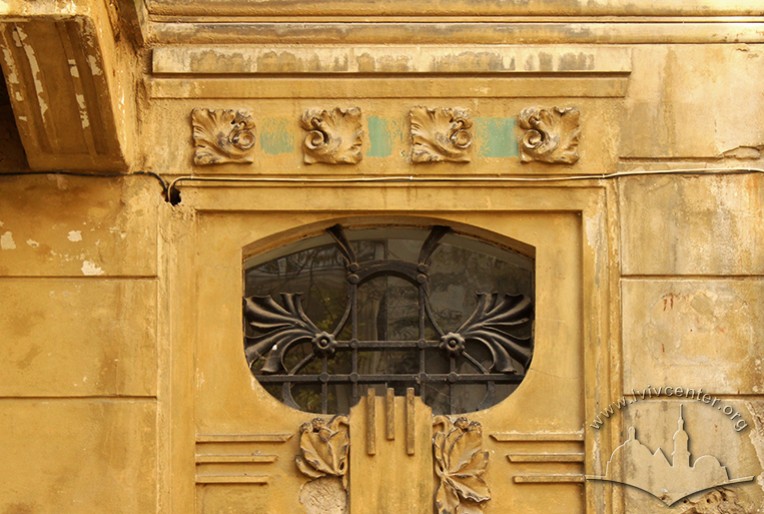 Lunette windows (the ones above doors) in Secessionist buildings often got an irregular shape which is difficult to describe. There is an example of a such on the building at 5 Bohomoltsia St. It has also forged metal leaves as decoration.
Read more 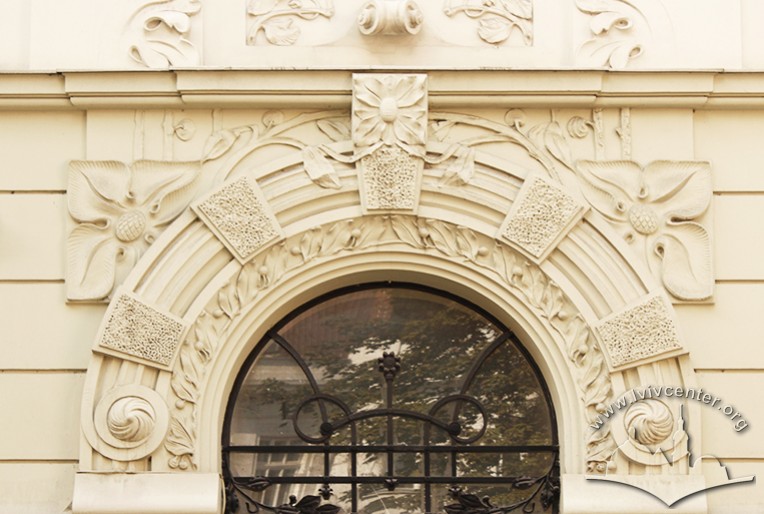 Secessionist latticework consisting of leaves and flowers dominates in this facade over its Neo-Renaissance layout which follows Classical order principles. The photo demonstrates the lunette window above the main entrance, richly accentuated by plasterwork.
Read more 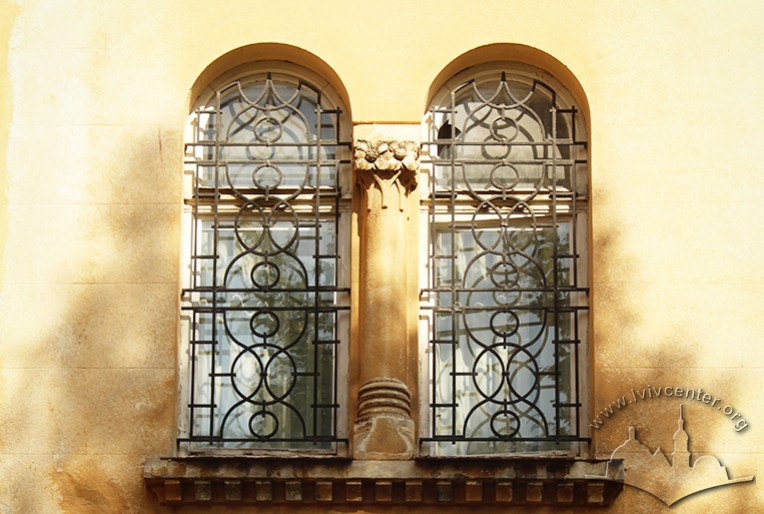 Such windows were common for the Romanesque architecture. It was due to the construction of a wall that had a couple of meters in width. The photo presents a biforium of the building no. 7 with a Secessionist column capital. Here it is purely decorative.
Read more 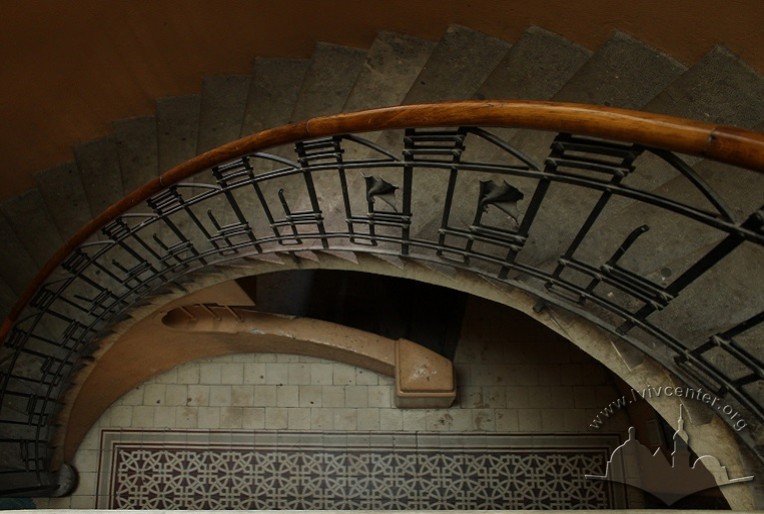 The most interesting feature of the building at 8 Bohomoltsia St. is the peculiar location and design of its stairs. The photo demonstrates its principal staircase which is made of monolith reinforced concrete.
Read more 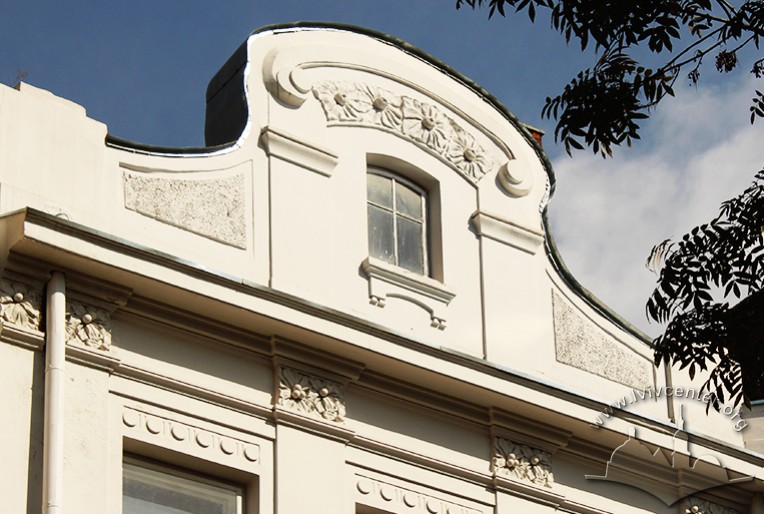 Even though the Secessionist architects aimed at creating a new style which is not based on the architecture of previous epochs, it was not always attainable. On the photo, attic of the building no. 9 is shown. Its design follows a typically Baroque curvilinear character. Also, the facade is visually divided with pilasters.
Read more

Symmetry, calm and balanced composition are among the characteristics of Neo-Classicism, They are featured in the design of this balcony. At the same time there are typically Secessionist elements: sunflowers. It makes the balconies the most decorated parts of the building no. 10 that contrast to the nuanced rustication of the facades.
Read more 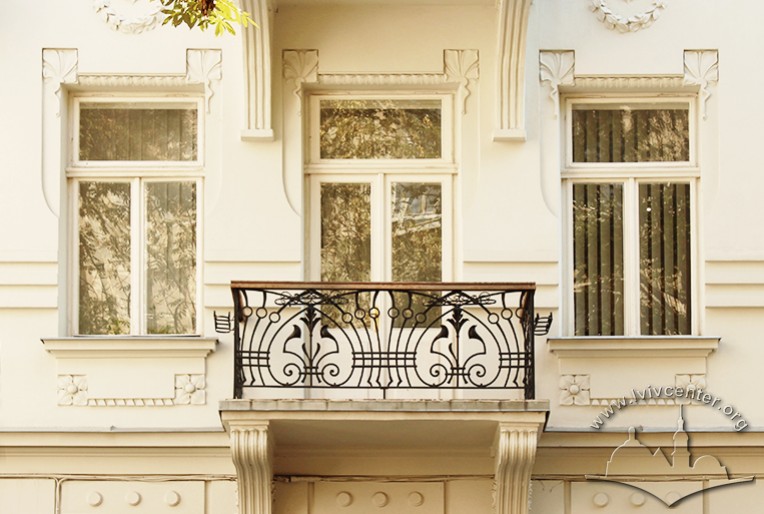 The building no. 11 was designed in complex with no. 9. and thus they are very similar. When looking closer at the windows, it is possible to see that they have Baroque-like trimmings and stylized pediments in shape of two recessed volutes.
Read more 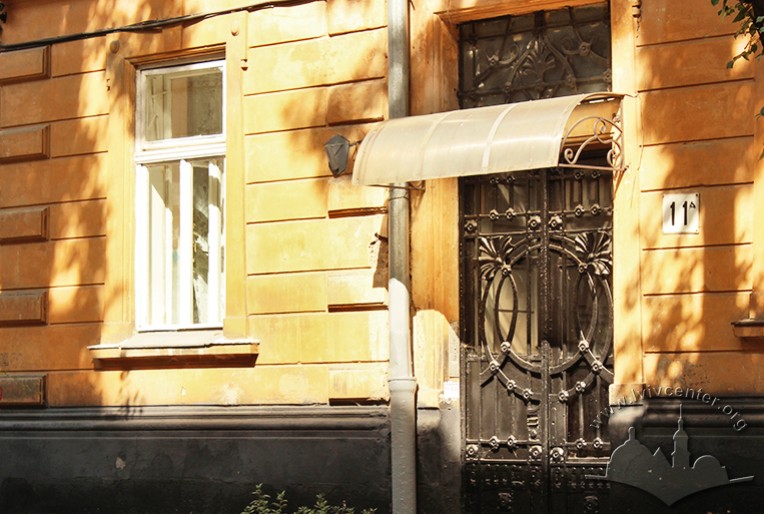 A rather restrained design of the building no. 11a is enlivened by forged metal doors of the main entrance.
Read more 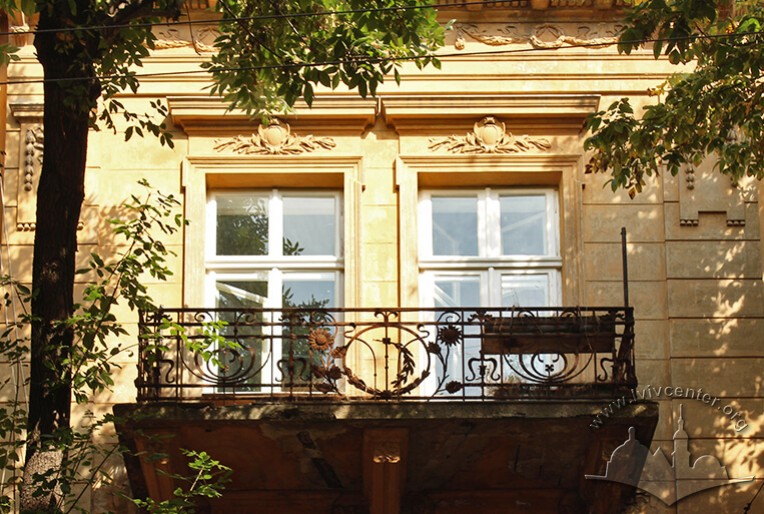 On the facades of the buidling no. 15, Secessionist motives are combined with Neo-Classicist ones. This house was originally a mirror reflection of the building no. 10 located right across the street.
Read more

The street's history and wider contexts 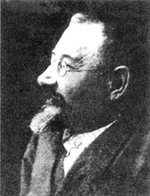 Ivan Levynskyi is one of the most interesting figures in Lviv's history of architecture and urban development in the early 20th c. He was born on 6 July 1851 in the Galician town of Dolyna near Stanisławów (now Ivano-Frankivsk). In 1875 he graduated from the Lviv Polytechnic and opened his own architectural bureau soon, a company for producing building materials and a ceramic studio. From 1903 he was a professor and taught architecture at the Lviv Polytechnic.

Levynskyi was a member of several associations organized by Galician Ruthenians — Prosvita, Silskyi Hospodar, Student Society Osnova; he was a patron of the Workers' Educational Society Postup, and member of the People's Museum Council.

Deported by Russians to Kyiv in 1914, along with numerous Polish intellectuals, Levynskyi founded the Agrarian Technical Society Pratsia and built a Catholic church in the Hutsul style in Kyiv. On returning to Lviv in 1918 he fell ill and died.

Levynskyi designed and built numerous Lviv buildings in a style which combined Viennese Secession with Carpathian folk architecture motifs. The most interesting are, in particular, the buildings of the Chamber of Commerce, the Dnister Association, the Academic House, and the Asnyka (now Bohomoltsia) street ensemble. He also designed and built hospitals and sanatoriums in Lviv, Horodenka, Kolomyia, Ternopil, Vorokhta, Zalishchyky, and Zolochiv. In 1917 he built a Catholic church in the Hutsul style in Kyiv.
Read more