Ivan Levynskyi considerably influenced the creation of Lviv’s architectural face at the turn of the 20th century. As the owner of a construction company, he managed the construction of many important public buildings of the city, such as the Opera Theater, the Mikolasza passage (non-existent today), the hotel George. As an architect, he designed a large number of mainly residential buildings. As a professor, a lecturer of Civil Construction at the Higher Polytechnic School, he had a significant influence on a whole generation of architects, a lot of whom underwent practical training in his architectural bureau.

One of Levynskyi's greatest works is designing and building up Kastelivka in the 1880s-1890s together with Julian Zachariewicz, his teacher and the first rector of the Polytechnic Institute. The architects aimed at creating a comfortable environment which would combine the advantages of living in the city and in the country. Opposing "rubber-stamped" residential buildings and row housing in general, they tried to avoid them. Thus Kastelivka, an area bounded by modern Henerala Chuprynky, Sakharova, Horbachevskoho, and Bandery streets, became an elite residential area with beautiful villas and lots of green spaces. This solution resonated with modern architectural trends and was consonant with Ebenezer Howard’s ideas of the garden city and with the ideas of Camillo Sitte, an Austrian architect and urbanism theoretician.

The original layout design of Kastelivka (1889)

Subsequently, Ivan Levynskyi continued to implement similar but smaller-scale projects. One of them was that of Asnyka street. In this case Levynskyi's aim was to create an environment for life virtually in the center of the city making it as comfortable as possible. In the early 20th century active transport, including trams, and pedestrian traffic was focused there. The row multi-storied houses around were situated rather densely. So Lewiński designed a green square in the middle of the projected street and saw to it that the apartments and the buildings’ communication spaces like vestibules, staircases, and courtyards were made most convenient. However, the city authorities did not support this project and banned its implementation in late 1903. The following conditions were laid down: to renounce the green square, to lay out the street clearly parallel to Pekarska street and to extend it by one meter (DALO 2/1/121: 113-114). Then, however, due to appeals of the owner, who emphasized that the projected street with the green square was better on aesthetic, practical, and hygienic reasons than the one required by the Magistrate, and thanks to the protection of the project by Lewiński himself, it appeared possible to implement the street project in its original conception. 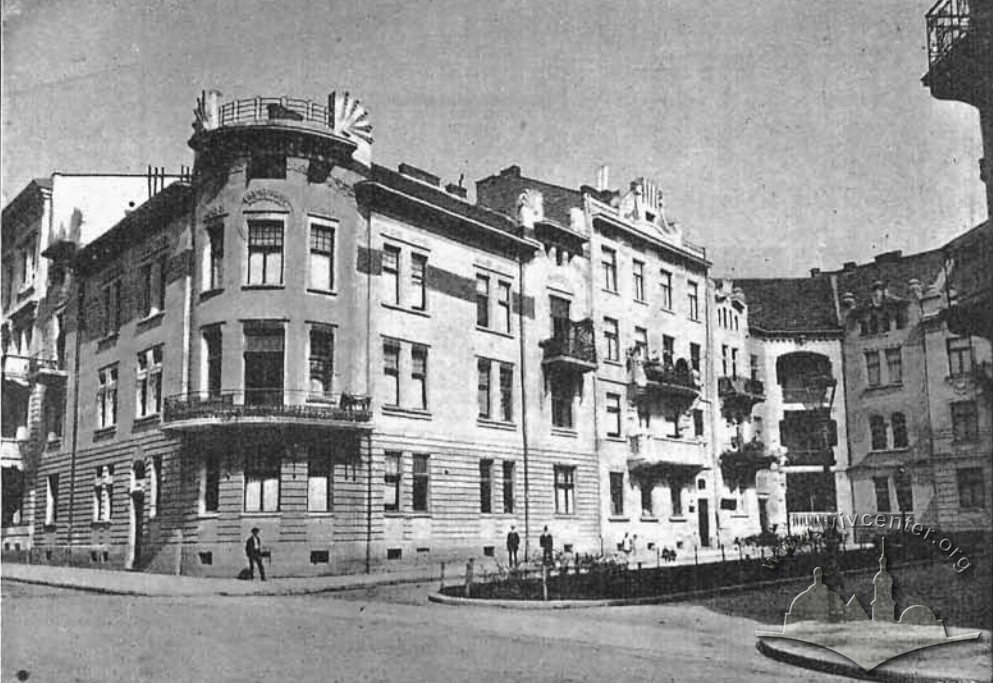 Bohomoltsia St. in 1908 just after the construction

First, the relief of the area was levelled. According to the longitudinal section of the area, where the street was to be laid, made by Ivan Levynskyi, the territory rose from Franka street eastward, rather steeply behind the villa, and then sharply decreased by 3 meters to the level of Klionovycha street. This relief was due to the bastion which existed there earlier; it was levelled, and all buildings standing there were dismantled. The street was built up beginning with houses 9-11; house 2 was the last one. Permission to move into the latter was granted in October of 1908. The green square located in the middle of the street became traditionally called the "rondeau" by Lvivites. 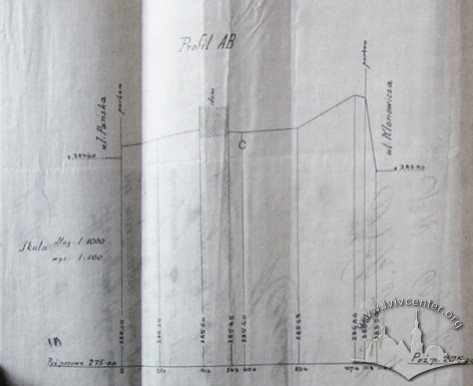 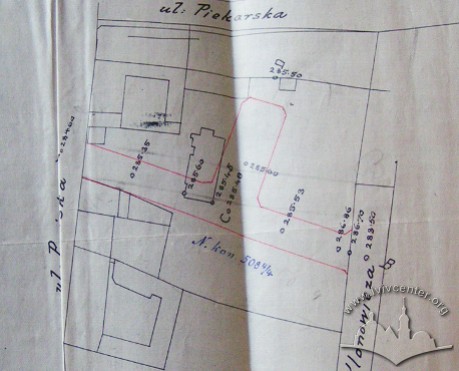 After the successful implementation of Asnyka street Ivan Levynskyi developed also some other similar projects. Among them was Domagaliczów (now Akademika Pavlova) street, Glinianska (Dontsova) street 8-10a. A complex somewhat similar to that on Bohomoltsia street was constructed on the latter. It consisted of four buildings grouped around a common courtyard, separated from the street by a picturesque fence with a gate and two wickets. The courtyard’s design is similar to that of the cour d'honneur, ceremonial courtyards located in front of the main entrances to the palaces of the 16th-18th centuries (e.g., the famous Palace of Versailles).

Other Lviv architects also tried to diverge from the construction of typical straight streets and to add more greenery in the urban space. In particular, Mariyi Konopnytskoyi street can be mentioned, which was designed by architects Ferdynand Kassler, Józef Awin and Stanisław Olszewski. According to the project, eight townhouses were to be constructed on each side of the street. The four central houses on both sides were to be located several meters deeper into the plot, thus creating more space for greenery. However, due to the begining of the First World War, the project was not finished; only half of it was implemented.

This approach remained actual in the interwar period. Engineer Ignacy Drexler, the author of the project of the regulation of Lviv and one of the first urbanists of Galicia, offered a similar design for new streets of Lviv (Odbudowanie wsi i miast, 1921, 181-184). In addition, similar ideas were used in various projects aimed at improving the densely built up and unhealthy urban environment. New buildings, often designed in the Functionalist style, were now built indented from the red line, arranging little gardens in front of the façades. Moreover, the construction of wings was abandoned, thus improving the situation with lighting and airing of the premises. Instead of apartment buildings, villas and mansions were constructed more frequently at that time as they became available to greater number of people.