Olga Zarechnyuk
The history of the territory adjacent to Bohomoltsia street is a prime example of how the city developed in the 16th-20th centuries. In the 16th century the territory was occupied by one of the bastions of the fourth line of the city fortifications. The bastion’s borders ran along modern Klionovycha street in the east and between the houses of the south side of Bohomoltsia and Hulaka-Artemovskoho streets (Historical Atlas of Lviv, 2014, fig. 3.6). Although the fortifications were dismantled in the 1780s, a typical kind of relief remained there. The plot formed there was assigned the address Pańska street 5 or conscription number 508 4/4. It occupied the entire territory of the former bastion. 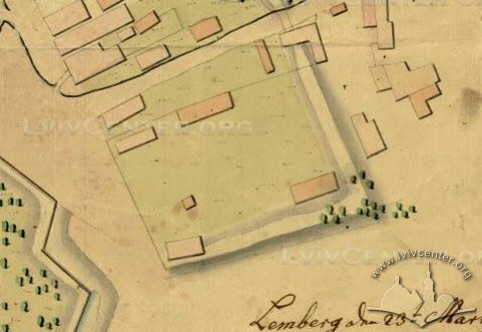 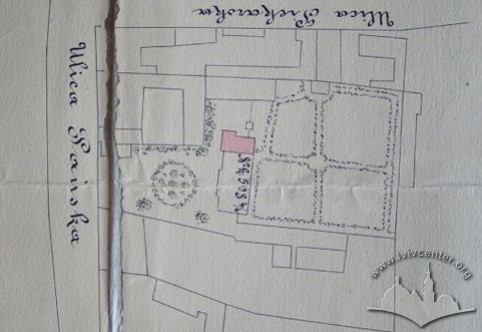 
Buildings appeared in this area as early as the 18th century. In the 1780 city map two stone houses and several wooden ones are shown there. At the end of the century a residence was arranged there. A villa was built in the middle of the plot, a residential building emerged in its northwest corner, a garden was arranged in the rear. Utility buildings were constructed nearby. The plot remained in this condition until about 1870. It was in that year that the owners rebuilt the stable adapting it for housing, sold the residential building; in 1874 they separated a part of the plot in its southwest corner and sold it. Later another residential building was constructed there (now there are two buildings in its place, located on Bohomoltsia street 2 and on Franka street 7).

Due to the configuration of the plot and its topography it was impossible to construct buildings on all sides of the villa, as it was case, for example, with a small palace on Lychakivska street 15. However, the villa was expanded (in 1870, 1875, 1879). Its representative nature was supported by the construction of a new fence with tall stone pillars, forged metal rods and a picturesque watchman’s house, as well as by arranging  ordered green spaces: a large circular flower bed in front of the buiding and a regular garden behind it.

In 1879 a single-storied pavilion of Piotr Mieczkowski’s photo studio was constructed adjacent to the villa’s northern side. This spacious single-storied building was, apparently, built entirely of modern metal/concrete structures. The main hall of the studio was lit by an almost six-meter-long window on the north façade and by a similar-size skylight in the roof. These windows were made as unnoticeable from the street as possible. The studio’s main façade had a rather ordinary Neo-Renaissance order decoration (symmetrical, with Corinthian order pilasters, an entablature and an attic with the name of the studio). Later it became owned by Dawid Mazur, a court photographer, who reconstructed the building and installed modern photographic equipment there around 1897. The villa’s premises were used not only for dwelling. For several years, some of them were rented by the female private school of Antonina Gawrońska. 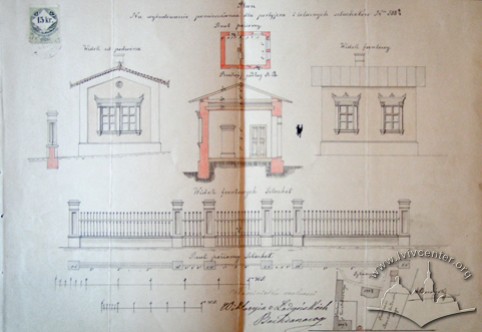 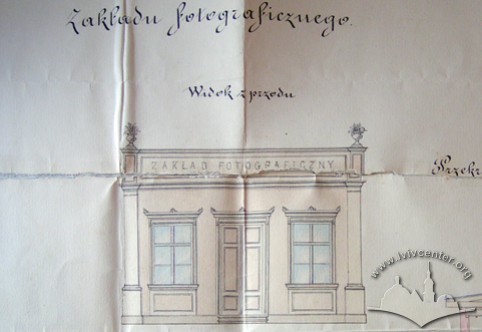 Front elevation of the photostudio building (Image courtesy of DALO, 2/1/121) 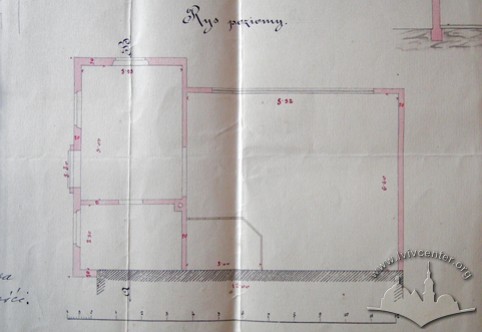 Ground plan of the photostudio building (Image courtesy of DALO, 2/1/121)

In 1903 a project of a new street was commissioned by the owner of the villa, which involved the demolition of all existing buildings and the construction of a number of profitable residential townhouses. The project was implemented in 1905-1908; the street was named in honour of Adam Asnyk, a famous Polish romanticist poet (1838-1897).