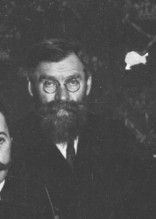 ID: 29
Physician, teacher and rector of the Academy of Veterinary Medicine.

Physician, teacher and rector of the Academy of Veterinary Medicine. He was born in Warsaw, graduated from the Warsaw Philology Gymnasium (1886), studied at the Chemistry Department of the Swiss Polytechnic University in Zurich (1889) and at the University of Zurich’s Medical Department (1891–1894). In 1898–1901 he worked as a lecturer of the Medical Department of the University of Lviv (then Lemberg). From 1921 and until the end of his days, the scientific-pedagogical and civil activities of Moraczewski were connected with the Academy of Veterinary Medicine of Lviv, where he first headed the Faculty of Curative Chemistry and General Pathology and later the Faculties of Biochemistry and Pathologic Physiology; he was elected pro-rector and rector of the Academy (1925–1927). In 1940, according to the decision of the High Evaluation Commission of the Soviet of Peoples Commissaries oftheSovietUnion (ВАКприРНК CPCP), without defending his dissertation, Moraczewski was granted the degree o fDoctor of Biologic Sciences and the title of Professor of the Faculty of Biological Chemistry and Pathologic Physiology. Morachewski conducted his first scientific research in a chemical laboratory of the University of Zurich under the leadership of Professor H. Eigorst; his research was dedicated to developing and improving methods of defining mineral substances in urine and excrement, and the characteristics of mineral metabolism while ailing from infectious diseases, leukemia and cancer, all of which considerably widened the knowledge about the pathogenesis of these diseases. A number of works of this period relate to the methods of researching metabolism during diabetes. With these works Professor Moraczewskilaid the foundation for a new direction – Clinical Biochemistry; he summed his research up in 1894 as a textbook of clinical and chemical research. Another research direction (the research of protein metabolism) was developed by W. Moraczewski in scholarly institutions of Lviv and Karlovy Vary. He then paid attention to the insufficiently researched question of the creation of indole and indican.  Amethodofliverfunctionaldiagnosticsisbasedonthisresearch. The third direction of his research focused on metabolism as it is affected by the schedule of people’s meals and the feeding of animals, mineral salts and various internal factors. Having noted that the separation of water depends on the make-up of food, the professor proved that oils keep water in tissues and, continuing this research, defined the connection between the exchange of calcium and oils.

Based on the above-mentioned material obtained during the research of urine chemical composition, and the data of his private medical practice, in 1936 Professor Moraczewski published in Warsaw a monograph entitled "The Treatment of Kidney Desease" (Leczenie chorób nerkowych) which is still relevant today. Some of his work was also dedicated to studying the pathogenesis of myoglobinemia and colic in horses. His student academician Stepan Grzycki further developed his research and therapy methods. W. Morachewski died in Lviv.