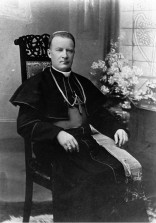 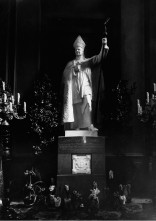 Józef Bilczewski was the Roman Catholic Archbishop of Lviv in 1900–1923, a professor and rector of Lviv University, a member (so-called virilist) of the Galician Diet. In 2005 he was canonized as a saint of the Roman Catholic Church.

Józef Bilczewski was born on 26 April 1860 in the town of Wilamowice (Silesia, Poland) and died on 20 March 1923 in Lviv. His birth name was Józef Biba; he was the oldest of nine children in a family of a poor farmer and carpenter.

He headed the Lviv Archdiocese of the Roman Catholic Church at a time when the Ukrainian-Polish confrontation had passed into a stage of mass politics and subsequently an open war. Given the unofficial status of the head of the "Polish Church", the role of the Churches as national institutions in Galicia in the early 20th century, as well as the politicization of church life, Józef Bilczewski was considered one of the leaders of the Polish national movement. It is interesting that he, who came from a "simple family", was the spiritual leader of the "noble" Polish people, while the "peasant" Ukrainian nation's spiritual leader was Count Metropolitan Andrey Sheptytskyi, an aristocrat.

The early 20th century was a time not only of mass national movement but also of labor one. The Catholic Church had to respond to the spread of socialist ideas by offering its own social doctrine as an alternative. In this context, the activity of the bishop as a "patron" of workers and of the homeless or needy, was quite logical. He actively supported the pope's encyclic Rerum novarum, which outlined the Vatican's sharply negative attitude to "modernism" in philosophy and public life, treating it as a "synthesis of heretical thoughts." Corporatism, supported by Pope Leo XIII's encyclicals, was promoted in the social sphere. He supported Christian social movement and advocated "fair" wages for employees. In 1903 he published a pastoral letter on this subject entitled W sprawie społecznej (On the Social Matters).

After being ordained a priest in 1884, Józef Bilczewski was a parish priest, a vicar, and an assistant teacher of religion for some time. In 1900 he was nominated the Roman Catholic Archbishop of Lviv and was enthroned in Lviv’s Latin Cathedral in 1901.

His public work was concentrated on helping and caring for the poor and providing general and accessible education. In view of this activity, saint bishop Bilczewski is considered the patron saint of the homeless.

He supported the idea that priests should not only be confined to pastoral activities, but should also be engaged in educational work, help the needy and promote the economic development of communities. For this purpose, Bilczewski introduced courses for Latin rite priests which were held at the Archbishop's Palace in Lviv. He financially assisted schools, students, working societies.

For his charity work during the First World War and the Ukrainian-Polish war (he created a committee to assist workers in Galicia, headed the Aid Committee during the Ukrainian-Polish War in November 1918, and was engaged in delivery of foodstuff to Lviv when the city was besieged by the Ukrainian army),  Bilczewski was awarded the Great Cross of the Order of Polonia Restituta. During the battle for Lviv in November 1918, he, together with Greek Catholic Metropolitan Andrey Sheptytsky, appealed against the bloodshed.

About 330 sacral objects were built in the Archdiocese of Lviv at the time when he was the Archbishop, and the cult of Our Lady of Częstochowa, the Queen of the Crown of Poland, was introduced. All this was perceived by Ukrainian politicians as a realization of Polish national policy in the region. For example, the mass construction of churches can be interpreted as an example of pastoral work and as an element of marking public space and as a manifestation of Polonization policies.

In 1913, Bilczewski opposed the Diet reform, explaining his position by the "radicalism" of the proposed changes. Above all,the reform was to extend the Ukrainian representation in the Galician Diet, accordingly, the position of the "Polish bishop" was sharply criticized by the Ukrainians.

According to his will, he was buried not in the cathedral, but "among the poor", at the less prestigious Yanivskyi cemetery in Lviv. In 2011 he was reburied in the Latin Cathedral of Lviv. It is the reburial itself, which took place on the eve of the 600th anniversary of the Lviv Archdiocese of the Roman Catholic Church in Lviv, as well as the use of patriotic topics for the design of the reliquary with the saint's relics, that makes one think about the difficult inter-denominational (and inter-ethnic) relations, where, on the one hand, there is the patron saint of the poor and destitute, the beatified saint of the Catholic Church and the national hero of Poland, Józef Bilczewski and, on the other hand, Metropolitan Andrey Sheptytskyi, an aristocrat and leader of another, "ignoble" nation, still not beatified.

Pl. Katedralna, 1 – Cathedral of the Assumption of the Virgin Mary