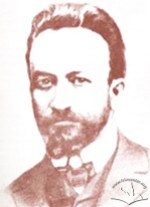 Professor dr. Adolf Beck (1863-1942), physiologist, the head of the Physiologist Institute of the Jan Kazimierz University,  in 1912-1913 and 1914-1915 served as a rector of the univesity. Prof. Beck was also the member of the Polish Academy of Sciences, honorary professor of the Medical Department. He committed suicide in August 1942.

“The whole floor of the Anatomy building was occupied by Physiology. This [branch] was directed by a very respectable former university rector, professor Dr. Adolf Beck, the same person who, together with Napoleon Cybulski discovered the basic hormone of adrenaline. He was ... one of the founders of the [physiology] branch, and also the author of the textbook. Professor Beck came from a wealthy artistic family of diamond cutters that had for centuries lived in Amsterdam. With professor's son Henryk, who was only a little younger than myself, I have spent wonderful vacations in the Tatra mountains...

A quarter of a centry later, during the times of occupation, I met professor Beck on Zielona Street.

'How far has it gone already!' he told me emotionally, 'Have a look! I have to wear a supposedly disgraceful David star on my sleeve!'

Soon thereafter he was visited by Gestapo who wanted to take him into the camp in Janowskie foretown, where altogether 150,000 Jews were murdered. But the son provided the father with cyanide and rector Beck did not get alive into the hands of the murderers. Henryk Beck, who after his practice at the Institute of Patologic Anatomy specialised as an outstanding gynecologist, survived the occupation thanks to the heroic care of his wife. In 1945 he became a chair of obstetrics in Wroclaw, but already after several months of promissing work he had suffered a lethal heart attack. His wife did not survive the loss. Full of sorrow, we were putting them to earth into a common grave.” (Aleksander Zakrzewski. Sanatorium Mariówka i medycyna. Wrocław,1975 r. S.170-171.)