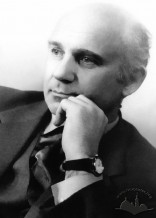 Born on September 26, 1938 in the village of Hurivka, Dolyna district, Kirovohrad region – died on September 25, 2004 in Lviv. He was born in the family of village intellectuals. After WWII, he moved to Western Ukraine and lived a while in Boryslav. In 1960, he graduated from Lviv Polytechnic Institute and received a degree in electrical engineering.

During his term, the main attention was paid to housing construction: this was the reason why the reconstruction of the house-building plant was started in 1976, and its building capacity was up to 210 thousand sq.m. of housing per year. In 1980, the first construction line of the plant and four houses of the new series were ready. The construction of Sykhiv residential area was launched. Construction policies were also realized in Riasne and Levandivka residential areas; in new streets like Topolna, Paton, Naukova; in Sknyliv, Stryi, Kulparkiv and Persenkivka ways as well as in a few trolley-bus routes, kindergartens and playgrounds, children's railway, the youth cultural complex "Romantyk", the water sports complex, Pohulianka cultural complex for school children, a new house-building plant and water treatment facilities. As part of an automated system for municipal government, the system of dairy and bread product supply and of transportation was regulated in 1978. The network of retailers and public eating places got expanded; the medical care and living conditions of city residents were improved; the material base of the city became stronger.

In 1979, it was for the first time that Lviv authorities developed a complex plan for the architectural decoration of the city for the next ten years that included the construction of a number of monuments, plaques, memorials and park sculptures, the decoration of public, industrial and residential buildings with monumental painting, and the harmonization of elements of visual agitation and propaganda, advertising.

At the same time,  a number of monuments and plaques were unveiled: the monument to teachers and students of Lviv  Polytechnic who perished during World War II (the yard at Lviv Polytechnic, 1976); to Ivan Fedorovych (the square between Pidvalna and Ruska Streers, 1977); a plaque commemorating  the celebration of May 1, 1890 in Lviv (the western façade of the City Hall, 1977); a plaque honouring Mykola Pavlyk,  a member of the Communist Party of Western Ukraine (at 5 Dzhokhar Dudayev, 1979).

Sekretariuk also participated in landscaping Vynnyky Lake (then – Komsomolske), renovating the Theatre of Opera and Ballet, erecting monuments, and creating museums (City arsenal, Museum of the Book "Rusalka Dnistrova"), as well as in beginning the construction of the Palace of Culture, and restoring the clock on the City Hall.