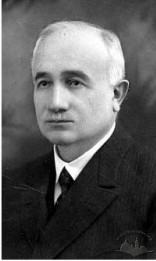 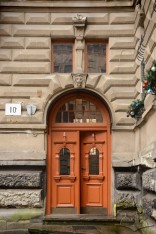 Władysław Stesłowicz was born on June 9, 1867 in the village of Sydoriv (now – Husiatyn district, Ternopil region) – died in 1940 in Lviv. His parents were Wojcech Stesłowicz (property manager of Vyshnivchyk in Halychyna Podillia) and Albina Szydlowska.

He studied at the high school in Ternopil and graduated in 1885. He continued his education at the Law Faculty of Lviv University. During his studies, he served one year in the Austro-Hungarian Army (Artillery Regiment 11). He studied law history at the workshop of Ksawery Liske and ancient Polish law under the supervision of Oswald Balzer. In 1890, he received the degree of Doctor of Laws at the University. Later, he studied economics and statistics in Berlin and Vienna.

In 1892, Stesłowicz became an official in Halychyna governorship. In politics, he was associated with the Polish Democratic Party (Polskie Stronnictwo Demokratyczne).  From 1906, he was a long-time deputy of Lviv City Council. He belonged to the Democratic Club and the Second (financial) section. On behalf of the City Council, he became a member of the supervisory board of the City Industrial Museum (Miejski Muzeum Przemysłowy) in 1907.

In 1911, he became a Member of the Austrian State Council. He belonged to the Polish Democratic Party and the Democratic Club, headed by the President of Cracow, Juliusz Leo.

At the beginning of World War I, Stesłowicz participated in the meetings of Halychyna politicians in Cracow (August 10-16, 1914) and entered the Eastern Section (Sekcja Wschodnia) of the Chief National Committee (Naczelny Komitet Narodowy). He returned to Lviv and dealt with the city’s current issues during the Russian occupation.

From March 19, 1918, to February 6, 1919, Stesłowicz served as Government Commissioner of Lviv. He governed the city after Tadeusz Rutowski, but his was to getting this post was different  than it was with his predecessors. During his stay in Vienna at the end of 1917, the then governor of Halychyna, Karl Georg Reichsgraf von Huyn offered him the position at the premise of the Polish circle, to which Stesłowicz belonged as a member of the Austrian State Council. He refused because of the hope that Rutowski’s health will improve. When it didn’t, Stesłowicz agreed to occupy the post for two reasons. First, a member of the Austrian Parliament could not resign during war, as new elections would not be announced. Thus, the Polish circle had to keep all his deputies. Second, the post of Government Commissioner was temporary until the election of new city authorities.

During the period the activities of the Commissioner and his Deputies Marceli Chlamtacz, Filip Schleicher and Jozef Neumann as well as of the City Council were limited by current needs of the city. There were problems caused by the war. The local authorities, however, tried to prepare the way for solving urgent problems after the war. Following a proposal from the Government Commissioner, the Council elected two separate commissions, one for the development and the future of the city, another – for residential affairs.

Stesłowicz participated in the battles for Lviv with Ukrainians as a member of the Committee of Citizens (Komitet Obywatelski) and the Interim Management Committee (Tymczasowy Komitet Rządzący).

In February 1919, he left Lviv, because he became a member of the Polish Parliament and had to move to Warsaw.

The political career in the Second Polish Republic

In 1919-1922, he was a Member of Parliament. He belonged to the Club of Constitutional Labour (Klub Pracy Konstytucyjnej). From July 24, 1920 to June 6, 1922, he served as Minister of Post and Telegraph and deputy of the Prime Minister in the governments of Wincenty Witos and Antoni Ponikowski. He belonged to the National Right Party (Stronnictwo Prawicy Narodowej).

Work in the economic sphere

Stesłowicz is a famous economist. From September 3, 1897, he worked in the management of the Chamber of Industry and Commerce in Lviv (Secretary and Chairperson of the Bureau, Chairperson of the Statutory Procedural Section). He was a member of Halychyna Industrial Commission (Komisja krajowa ds. Przemysłowych; June 5, 1902), Deputy Chairman of the Supervisory Board in Halychyna Credit Bank (Galicyjska Kasa Zaliczkowa, 1905), a member of the management of the Central Union of Halychyna Manufacturing Industry (Centralny Związek Galicyjskiego Przemysłu Fabrycznego, May 1905), Halychyna Regional Credit Bank (Galicyjski Ziemski Banku Kredytowy), Industrial Bank (Bank Przemysłowy). In 1920-1930, he was Director of the City Credit Society in Lviv (Towarzystwo Kredytowe Miejskie), Board Chairperson of the General Connections Bank (Powszechny Bank Związkowy), Joint Stock Oil Union "Premier" in Lviv; Deputy Chairman of the Central Union of Polish industry, mining, trade and finance (Centralny Związek Polskiego Przemysłu, Górnictwa, Handlu i Finansów); Member of the Chamber of Industry and Trade and of the Statistical Council in Warsaw; President of the Credit Bank for Cities in Lesser Poland  (Zakład kredytowy miast Małopolskich), Member of the Polish Economic Society (Polskie towarzystwo ekonomiczne) in Lviv. To his mind, the main task of the Polish economy was support for middle class. He also temporarily presided the "Initiative Circles for the economic reconstruction of middle class."