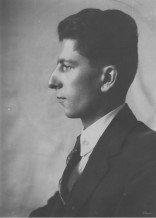 ID: 254
Polish botanist, politician, professor at the Jan Kazimierz University in Lviv and at the University of Wroclaw.

In the years when Kulczyński was the Rector of the University, the controversy about the official introduction of the "bench ghetto" intensified. The demands for the identification of individual places in educational premises for Polish and Jewish youth were supported mainly by young people associated with the National Democratic camp. As the Rector, Stanisław Kulczyński sharply condemned anti-Semitic excesses and demands put forward by the nationalist youth. In November 1937, in order to prevent the conflict, he issued a questionnaire in which young people had to express themselves in regard to the choice of places in the classrooms. The result of this survey showed that the demarcation of places in the university premises was not wanted by the majority of students. Stanisław Kulczyński was aware that such incidents undermined the image of the University as a higher educational and cultural institution. The Rector's decisive position was respected by the Polish professors of the University who expressed their recognition. On the other hand, the Rector repeatedly suffered attacks of nationalistic youth who distributed leaflets with images related to the activities of the professor and also came under the windows of his apartment on ul. Supińskiego, 11 (now vul. Kotsiubynskoho), taking the liberty of shouting hostile exclamations. Not agreeing to the introduction of the "bench ghetto," Kulczyński finally abandoned his position. He did not want to be subjected to pressure from political parties, believing that the greatest price for focusing attention on the intrigues was paid by the University at the expense of its prestige. He was considered to be brave and decisive. Kulczyński highly valued the university autonomy and freedom of science, as evidenced by his words contained in an open letter, where he explained his decision to retire from the position of Rector:

"It is easy to assume that under the guise of beautiful slogans of national solidarity, the protection of our Polishness and our culture, the destruction of university autonomy is under way, along with brutal depriving the autonomous management of their dignity as well as depriving Polish science of its freedom-loving rights, which alone are capable of ensuring development. Science cannot be developed under coercion not because of the professors' whims, but because science is free thinking; when thinking is enslaved it cannot be scientific (...)"

Apart from working at the University, Stanisław Kulczyński was a member of the Scientific Society in Lviv and the Physiographic Commission of the Polish Academy of Sciences. After the arrival of the Soviets in Lviv, already at the Ivan Franko University, Stanisław Kulczyński served as the head of the department of morphology and taxonomy of plants in 1939-1941. Later he moved to Krakow, where he participated in secret studies. After the Second World War Kulczyński moved to Wroclaw. He was one of the founding members of the Wroclaw Branch of the Polish Academy of Sciences. In 1945 he began to work at the University of Wroclaw (department of morphology and taxonomy of plants); in 1945-1951 he also served as the first post-war Rector of the University and Polytechnic.

In addition to research, Stanisław Kulczyński launched a dynamic political activity. In 1938, he became close to the Lviv Democratic Club (pol. Lwowski Klub Demokratyczny). During the Second World War in the course of a year (1941-1942) he acted in the structures of the Union of Armed Struggle (pol. Związek Walki Zbrojnej), later the Home Army, and served as a delegate to the Government of the Polish Republic in the territory of Lviv. From 1945 he was associated with the Democratic Party (pol. Stronnictwo Demokratyczne) as one of the organizers of this group in Wroclaw and Lower Silesia.