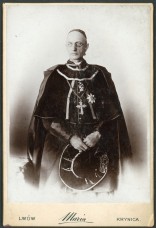 Sylvestr Sembratovych was born on September 3, 1836 in the village of Doshnytsia in Lemkivshchyna in the family of a priest. He received his secondary education at the Vienna Academic Gymnasium and continued his studies in Rome, in the Greek College of St. Athanasius and the College of Pope Urban VIII. It was there that Sylvestr Sembratovych was ordained in 1860. In 1865-1869 he was an associate professor and later professor of theology at Lviv University. He was twice elected dean of the theological faculty. From 1877 he was a canon of the metropolitan chapter. In 1879 he was nominated suffragan bishop under Metropolitan Yosyf Sembratovych (his uncle). After the removal of Bishop Yosyf in 1882, he became the administrator (temporary supervisor) of the Lviv metropolitanate. In 1885 he was enthroned as Metropolitan of Lviv. This status secured him a seat in the Galician Diet, where he was vice-marshal. He was also a member of the House of Lords of the Imperial Council in 1885-1898. In 1894 he became the second metropolitan in the history of the Greek Catholic Church (after Mykhailo Levytskyi) to receive the rank of cardinal. He died on September 4, 1898 of gastric cancer.

Sylvestr Sembratovych's activity coincided with a turning point in the history of the Greek Catholic Church. During the last quarter of the 19th century, the church gradually lost its usual status of a political leader in Ukrainian Galician society. The emergence of new ideologies — socialism and nationalism — required the church to respond to new challenges. Conflicts between Russophiles and populists intensified, forcing the metropolitan to look for compromises or to support one of the parties. The situation was complicated by the suspicions of the Galician provincial authorities, Vienna and Rome about Russophile and Orthodox sympathies among the Greek Catholic clergy, which were manifested in the trial of Olha Hrabar in 1882 and the removal of Metropolitan Yosyf Sembratovych. Under such conditions, Sylvestr Sembratovych's work was doomed to be the subject of debates and frequent criticism.

Sylvestr Sembratovych was constantly criticized both by Russophilesand by populists (more cautiously, though), and even by his own clergy. This was due to his key principles: fidelity to the Apostolic See to allay suspicions of Russophilia; allegiance to the Habsburg dynasty as proof of the traditional loyalty of the Greek Catholic Church; active work among the people to improve their life. An integral attribute in the implementation of this program (and the reason for criticism) was the metropolitan's belief in a compromise with the Polish elites of Galicia as the most optimal way to follow.

In 1885, trying to maintain the leading role of the Church in Ukrainian political life, Sylvestr Sembratovych, in agreement with the governor Filip Zaleski, nominated his own candidates in the parliamentary elections as opposed to the protégés of the joint Russophile-Populist Central Election Committee. As a continuation of this policy, on the initiative of the metropolitan, the newspaper Myr started to be published, which Kost Levytskyi called "a slave one" in his memoirs. Conceived as a counterweight to the populist Dilo, the Myr could not withstand competition and was closed in 1887. The reaction of the majority of Ukrainian society in Galicia to the metropolitan's actions in 1885 demonstrated the impossibility of returning things to the previous state in which the metropolitan residence in St. George's cathedral was the only center of Ukrainian politics. Therefore, Sylvestr Sembratovych, in search of new options, chose to cooperate with the populists.

The uniqueness and even revolutionary nature of Sylvestr Sembratovych lies in his "Western" worldview, that is, the desire to bring the Greek Catholic Church closer to the Roman Catholic Church while preserving the identity of the former. Consequently, contrary to popular opinion, he supported charging the Jesuits with a task to reform the Basilian Order and the idea of ​​establishing a boarding school for Greek Catholic children in Lviv by the Roman Catholic Order of the Resurrectionists. At the same time, he was the first Metropolitan of Lviv to openly oppose Russophilism. The populist character was manifested in the actions of Cardinal Sembratovych as early as the 1870s. In 1871 he initiated the publication of the newspaper Ruskiy Sion, which was published in a language close to the vernacular and promoted "Western" ideas, clearly unacceptable to Russophiles. In 1878, it was primarily through his efforts that the first prayer book was published in the vernacular, becoming an important step on the way to the necessary modernization of the church.

The apogee of the metropolitan's political activity was the "New Era" in which he managed to combine his sympathy for the populists and the policy of conciliation for some time. His speech in the Galician Diet on November 27, 1890 was quite significant. The metropolitan supported the program announced by Yulian Romanchuk, which coincided with his own principles. He addressed the Russophiles: "Therefore, all those who stick to this program [of the "new era"] are not renegades or apostates; and whoever does not accept it has no place in our Galician Ruthenia." Such an openly anti-Russophile passage, which was, moreover, proclaimed publicly, symbolized an epoch-making change that would clearly manifest itself in the times of Metropolitan Andrey Sheptytskyi, namely, the transformation of the Greek Catholic Church into a Ukrainian (in the modern sense of the word) national institution and the marginalization of Russophilia within it.

The metropolitan's support for the "New Era" policy finally consolidated the Russophiles in their negative attitude toward him. The cardinal experienced this, as well as the tendency to radicalize public sentiment, during the scandalous episode in May 1893. When the train with the metropolitan stopped in Vienna on his way back from a pilgrimage to Rome, representatives of Russophile youth broke into his compartment, called the metropolitan a renegade and threw eggs at him. This assessment of Sylvestr Sembratovych's activities was maintained by the Russophiles even after his death.

The failure of the "New Era" did not force the metropolitan to change his old compromise course. Again criticized by most populists, he supported Oleksandr Barvinskyi's initiative to create a conservative Christian social movement. Despite the efforts of Sylvestr Sembratovych, the general meeting of the clergy, held in Lviv in December 1896, reacting to the surge of disappointment with the "New Era," rejected the idea of ​​supporting the policy of conciliation, which was the last political failure of the metropolitan.

The ambiguity of Sylvestr Sembratovych's political activity was reflected in his activities in the ecclesiastical sphere (actually, these aspects were often intertwined). His main purpose was to strengthen the church by unifying the rite and increasing internal discipline, affected by the frequent conversion of priests into political activists. At the Lviv Synod of the Greek Catholic Church convened in 1891, which took place, as usual, in St. George's cathedral, the majority of the clergy rejected the Metropolitan's ideas for reforms in the church. First of all, it concerned the intention to introduce partial celibacy. The Synod was accompanied by behind-the-scenes political intrigues woven by Rome and Governor Badeni (thus, the resolutions of the Synod were changed by the Apostolic See without the knowledge of its participants), which further undermined the clergy's confidence in the metropolitan and his endeavours.

Metropolitan Sylvestr Sembratovych was a bad politician and, during his life, failed in most of his undertakings: he failed to maintain the dominant role of the Greek Catholic Church in politics, did not break the position of Russophiles (even in his own chapter), failed the "New Era" policy, was given an unfair image of a "conciliator" and a puppet of the authorities by the then society. Nonetheless, his struggle against the Russophiles and his open support for the idea of ​​the separation of the Ukrainian people laid the foundation for the further "Ukrainization" of the church. The "new era" supported by the metropolitan also became, in the long run, a guarantee of consolidating the populists and the whole Ukrainian movement. The steps taken by Sylvestr Sembratovych to consolidate the clergy and to strengthen internal discipline became, like many other steps of the bishop, a guideline for his successors.