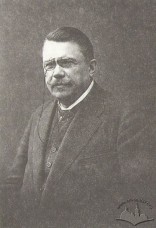 Yevhen Olesnytskyi (1860-1917) was a leading Galician politician of Ruthenian origin, but also an advocate, economist, journalist and translator who from 1899 was the active member of the academic society NTSh. He graduated from the gimnasium in Tarnopol and Lemberg University. Until 1891 Olesnytskyi resided in Lviv (then Lemberg), then in Stryi, where he maintained his advocacy office. Between 1900-1910 Olesnytskyi served as deputy to the Provincial Parliament (Sejm) and between 1907-1917 he was the deputy to the Austrian Parliament in Vienna. Consequently, in 1901-1914 Olesnytskyi resided in Lviv, and in 1907-1917 in Vienna. He was one of the most active Ruthenian politicians in the issue of the establishment of a Ruthenian (Ukrainian) University in Lemberg at the Austrian Parliament. He also organised and founded a number of societies and unions in the Galician countryside: Ruthenian National Institute (Narodnyi Dim), branches of populist Prosvita society, civil organisations such as what became later Ruthenian trade union Maslosoyuz.

In 1909 Olesnytskyi was one of the organisers of the Provincial Agricultural Exhibition (Krajowa Wystawa Rolnicza) in Stryi; he was also the co-organiser of other financial unions of Galician Ruthenians such as Dnister, Zemelnyi Bank, and Centrobank.