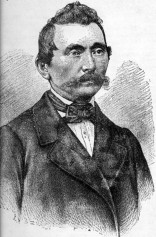 Ukrainian political and cultural figure, judge, Galician Diet member and its vice-marshal, member of the Ruthenian Congress, Congress of Ruthenian Scholars, organizer of the Ruska Besida society and its theater, head of the Prosvita.

Yulian Lavrivskyi (pol. Julian Ławrowsky or Ławriwśkyj, 1821-1873) made a significant impact on the socio-political and cultural life of Lviv in the 1860s. He came from the family of a Greek Catholic priest from Lemkivshchyna. Lavrivskyi, upon graduating from the Law Faculty of Lviv University, became a member of the Provincial Department (1861), an adviser to the Higher Provincial Court in Lviv (1864), vice-marshal of the Galician Diet (1869–1873). Owing to his positions and activities, Lavrivskyi was always in the limelight,  remaining at the same time a loner in politics. He shared the fate of the "Ruthenians of Polish nation" (gente Ruthenus natione Polonus), who saw no opportunity for Ukrainian and Polish national movements to develop apart.

Lavrivskyi spent mere 12 years in Lviv, not including his student years. Despite this being a rather short time, his influence on the city remains unparalleled. He moved to Lviv in 1861, upon being was elected a member of the Galician Diet. Among his most important achievements are: the opening of the Ukrainian cultural and entertaining society Ruska Besida (i.e. Ruthenian Conversation) in the premises of the National House (1861), organization of the Ruthenian Club in the Galician Diet (1861-63), establishment of a Ukrainian theater at the Ruska besida (1864), and opening of a peasant bank in Lviv (1867).

In politics, Lavrivskyi was an idealist and romantic, who believed that everything and everyone can be harmonized. He persistently sought to reconcile the interests of the Austrian authorities in Galicia with the interests of Ukrainians and Poles. He sharply criticized the pro-Russian tendencies in the Ukrainian national movement, although remained in contact with the representatives of the so-called "Old Ruthenian Party" all the time. As vice-marshal, Lavrivskyi tried to use the Polish-Ukrainian civilizational and cultural unity (which, he believed was rooted in common history) for the modernization of Ukrainian society in Galicia. However, his initiative of Polish-Ukrainian understanding in 1869 failed. Various political forces began to distance themselves from Lavrivskyi, and it was only his premature death that saved him from a complete oblivion. At the same time, the Nationalists (Narodovtsi) exploited the image, which Lavrivskyi gained after the failed agreement. He was elected the head of the Prosvita society in order to strengthen its organizational structure. Volodymyr Navrotskyi would comment "Lavrovskyi is our head now. We must exploit him, while we can."

Lavrivsky’s marriage to a Pole played an important part in his political views too. His wife, Kamila Lavrivska, née Malecka, was seven years younger than her husband..Their wedding took place in 1848, but the exact date is unknown. In family relationships, the couple tried to maintain harmony between Ukrainian (Greek Catholic) and Polish (Roman Catholic) identities. Lavrivskyi sought to implement such a model in politics as well. The Lavrivskyi couple died of typhoid almost simultaneously: first, on Sunday, 22 April 1873, Kamila and the following day, without learning of his wife’s death, Yulian. They were buried together at the Lychakivskyi cemetery, in Kamila's family crypt. It was then that Lavrivskyi's words, said when reasoning the 1869 Ukrainian-Polish project, became clear: "Death itself does not separate [us], as even our graves are our common."