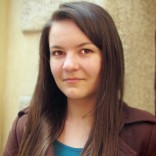 She can be reached at: [email protected]

Zarechnyuk graduated from Lviv Polytechnic National University, Department of Restoration and Reconstruction of Architectural Ensembles. She holds a MA in architecture (2013).