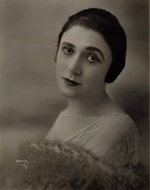 1891-1896 – an actress at Abraham (Avrom) Goldfaden’s troupe, the Romanian Theatre in Bucharest, the Jewish Theatre in Budapest.

1896-1914 – having moved to New York, worked at the Jewish Thalia Theatre on Broadway and at English-speaking theatres.

Bertha Kalich (also spelled Kalish) was born in Lviv in a family of Jewish manufacturers. The girl’s parents wanted to see her an actress on the stage, so as a child she attended the Opera Theatre and performances at other theatres and learnt to sing attending the Jewish school of Czatzki, a private music school and dramatic art lessons.

At the age of 13, Bertha Kalich joined the Polish Skarbek theatre where she sang in the adult choir. Her first role was in the opera Traviata. Later she participated in the opera Mignon. In a year’s time the girl learnt to speak German well and to recite and took part as “the daughter” in a German performance entitled I give my daughter in marriage which was a great success for her. Some sponsors who saw her on the stage in this performance suggested sending the young actress to Italy so as to develop her voice there. However, Jaakov Ber Gimpel, the Jewish theatre director, hindered her from doing this inviting her to become the prima donna of his newly created theatre.

Bertha Kalich’s first steps in the Jewish theatre were made in the performances of Shulamith, where she played a role of a little girl singing the well-known aria “Come to me, oh handsome youth”, and of The Two Shows. Since a lot of actors in Gimpel’s troupe had come from outside Lviv, it was especially important for the Lviv public to see this young actress on the stage. Bertha Kalich showed herself to advantage and was given the leading part in the famous performance of Shulamith by Abraham Goldfaden shortly; from that time on, this performance was announced in the following way: “…with the participation of Bertha Kalich, a Jewish daughter of Lviv”.

In 1890 she acted in a new performance of Y. L. Landau’s Hurdus and Miriam together with actor Zelig Schorr, and later in A Millionaire and Still a Beggar in a role without singing.

When Abraham Goldfaden arrived in Lviv and assumed management of the Jewish theatre, Bertha Kalich acted in all his performances: Rabbi Yoselman, Rothschild, The Tenth Commandment, The Messiah Times. Before he had to leave, the playwright invited the best actors, including Bertha Kalich, to join his troupe. Together with Goldfaden’s theatre the actress went to Bucharest where she was welcomed enthusiastically by the public; the Romanian National Theatre director invited her to his troupe despite her Jewish origins. “She was such a success that anti-Semitic theatregoers, who had come with the intention of pelting her with onions, threw flowers instead.”

Bertha Kalich never returned to Lviv. She acted in Budapest for some time and moved to America together with her parents in 1896. There she joined the Yiddish Thalia Theatre. At first, she took part in the classic Jewish plays like The Two Kings, Perele, Shulamith, but as early as December of that year she was given leading parts in Othello, Romeo and Juliette, and Hamlet. Bertha Kalich worked a lot at the Thalia Theatre during all seasons and joined the main troupe; she was going on tour to the neighbouring states and acted at a Romanian theatre at the same time. Later, in 1899, she became one of the Thalia Theatre directors together with Spachner, Kessler, Mogulesko, Feinman and Simovitch.

From 1900 she played the part of Freda in all performances of Jacob Gordin’s God, Man, and Devil. As actors recall, the well-known playwright wrote several performances specially for Bertha Kalich.

In 1914 Bertha Kalich tried her luck in Hollywood. She acted in a few silent movies.

Beginning from the 1920s, Bertha Kalich gradually stopped to act owing to poor health. She published a book of her memoirs at that time.

I give my daughter in marriage, Polish Skarbek theatre, Lviv.

A Millionaire and Still a Beggar, Gimpel’s Jewish theatre, Lviv.