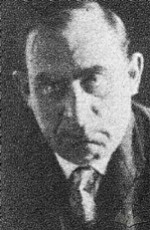 Yidl Guttman was born in Lviv in a Jewish religious family. He was provided with a solid religious education as he studied at a beth midrash and yeshiva for up to ten years. Yidl’s brother, Shmuel Guttman, was the chief rabbi in the Temple synagogue. Sometimes they were compared between themselves as those who bring Jewish tradition and culture to the masses, the one doing this among the religious Jews while the other doing the same among the theatrical public. Yidl Guttman was also educated in a secular manner as he studied commerce. He worked as an accountant at a hat trading company for two years.

Yidl Guttman entered the Zionist society “Maker Koydesh” and got acquainted with Schorr, Weinstock and Eskreis who were leading actors of Gimpel’s theatre. Under their influence he joined the Jewish theatre as a scriptwriter in 1891. Later he replaced Bernard Wilenski in his position as a prompter and after some time became an actor. His first role was in a performance of Jacob Gordin’s The Lurie Brothers.

From that time, Yidl Guttman acted at Gimpel’s Jewish theatre in Lviv for twenty years. During his work at the theatre he was an actor, scriptwriter and director. Under his management, a new generation of Yiddish-speaking actors grew up; a considerable part of them left the country and made a career abroad.