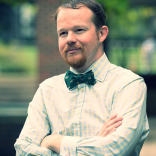 Dr. Beorn is a historian of Holocaust and Genocide Studies. He currently serves as a Lecturer in the Corcoran Department of History at the University of Virginia and a Consultant to the United States Holocaust Memorial Museum.

He is the author of two books "Marching Into Darkness: The Wehrmacht and the Holocaust in Belarus (Harvard University Press, 2014)" and "The Holocaust in Eastern Europe: At the Epicenter of the Final Solution (Bloomsbury Academic, 2018)". Currently he has been working on the book "Between the Wires: The Janowska Camp and the Holocaust in Lviv".

Lecture by Waitman W. Beorn at "The Janowska Camp at the Center of the Holocaust" at the Center for Urban History as part of the program "Lwów, לעמבערג‎, Львів, Lemberg’43: The City that did (not) Survive."